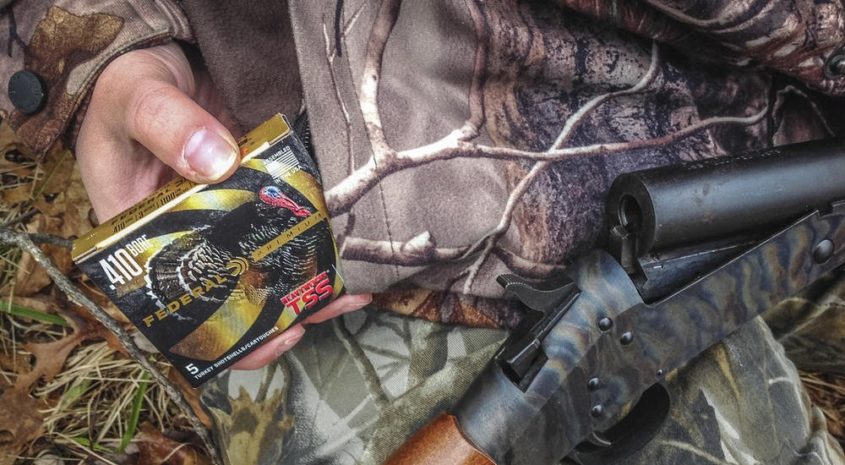 Understanding new .410 potential means getting down and dirty with TSS specs

Outwardly, the gun was nothing special. An old single-shot .410 with a loose action and decades of wear generates little interest from hunters or collectors. But the gun belonged to my grandfather, the man who taught me to shoot, walked with me through the dense woods bordering our farm, and imparted his wisdom of the ways of the wilderness. It was the first “real” gun I ever fired, and the one with which I learned the great responsibility of harvesting game. I used it to take squirrels from the tops of the 100-year-old stand of oaks for the evening’s supper.

It was in that very same forest on opening morning almost 10 years ago that turkey hunting took hold of my heart. I’d never seen a more beautiful sight than a mature tom strutting inside of 15 yards toward my decoys. I saw his neck covered by the worn brass bead of my Papa’s single shot, and I remember the moment the gobbler fell to that small-bore shotgun.

It was a clean kill just 12 yards from the blind, even shooting high-brass 6s. The gobbler wasn’t the biggest I’d ever taken, but it was the most memorable. That bird, which hangs on the wall today, proved to me that turkeys could be responsibly harvested with the .410, but with great restrictions. Those were the days before specialty ammunitions, guns and chokes. Given advancements this year and last, the world of four-tenning for turkeys is opening up for a new generation.

Though I hold dear my experiences with the .410 for longbeards, prudence is necessary before charging headlong into a love affair with the baby bore for turkeys. Ensure both the gauge and shot sizes you’ll be using are legal in your state. While 34 states allow the .410 for turkeys, 16 still have limitations on anything smaller than 20-gauge. Companies like Federal Premium, however, are lobbying to change legislation with proof of modern ammunition and firearms innovations that greatly improve the lethality and range of sub-gauges.

According to Ryan Bronson, Federal Premium’s director of conservation: “Federal Premium is working with wildlife agencies and policy makers in the 16 states that currently prohibit turkey hunting with shot smaller than No. 8 and shotgun bores smaller than 20-gauge to rethink their regulations and give turkey hunters of all ages, statures and physical abilities more options. Most of these turkey ammunition restrictions were put into place when lead was the only shot material available.”

Legality aside, there’s also the ethical responsibly of the hunter to make a quick and clean harvest. Previously, the limited range and power of standard lead loads through older guns meant turkey hunting with the .410 was best suited for experienced hunters willing to invest significant time at the patterning board and wait for a 15-yard shot. All that changed in 2018 when Federal Premium introduced Heavyweight Tungsten Super Shot (TSS) ammunition in .410, especially for turkeys.

Understanding the new potential of the .410 means getting down and dirty with TSS specs. While specialty tungsten turkey loads have been on the market a while, Federal Premium has taken it one step further with TSS, which uses a tungsten alloy that is 22% more dense than standard tungsten and 56% denser than lead.

“A No. 9 Heavyweight TSS pellet carries as much penetration energy as a No. 5 lead pellet at all ranges,” says Federal product line manager Dan Compton. “This means you can greatly increase the pellet count of a payload by using a smaller shot size, but penetrate as much or more because of the increased density. Overall patterns densities are increased, so there are more hits on the target.”

With a muzzle velocity of 1,100 FPS, TSS brings more killing power to the baby bore than ever before. Not only are the loads buffered but a full-length wad protects gun barrels from the hard shot. Best of all, that triple-armed wad remains with the shot longer, meaning TSS provides far superior patterns at 35 yards than my old lead high brass did at 15 yards. In fact, with my gun — the old single-shot break-action with the fixed full choke mentioned earlier — the TSS blew through center mass on the 15-yard patterning target. While I do not advocate taking ultra-long-range shots with any gauge, the right .410 with TSS can put more pellets in the turkey kill zone at 40 yards than did some 12-gauges using lead a decade ago.

TSS innovation is the major factor putting more .410s than ever before into the hunting woods. Dedicated turkey-hunting .410 shotguns are beginning to emerge as well. Five-round boxes of Heavyweight TSS retail for $31.95, and while that price may sound steep, the performance more than justifies it.